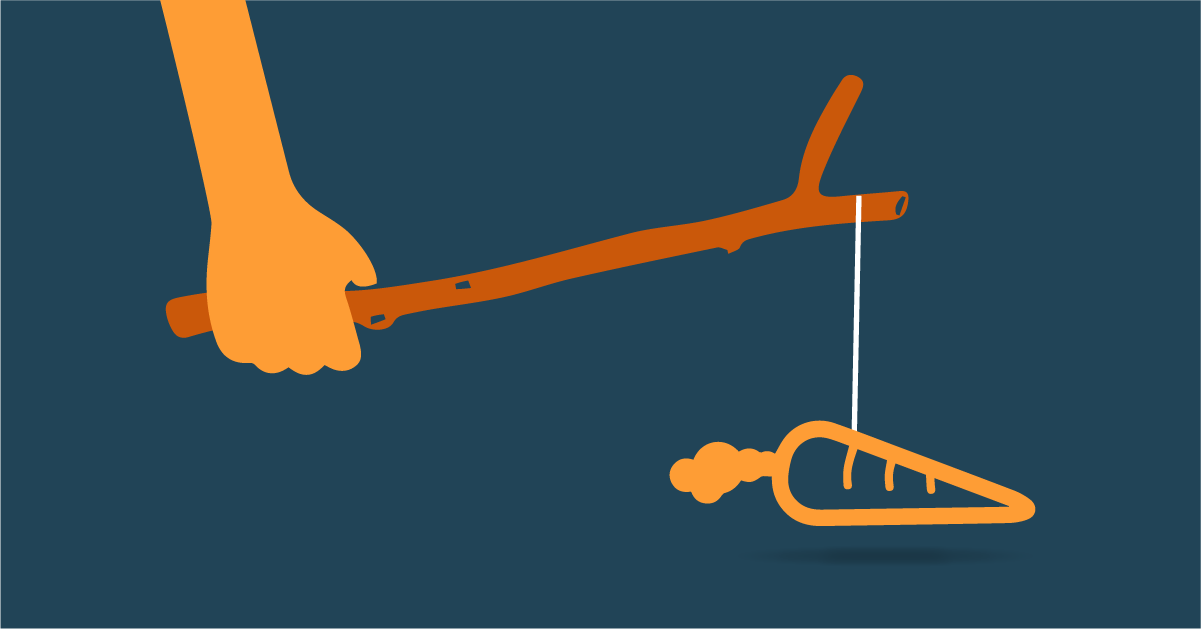 Imagine walking into your local grocery store and seeing literally hundreds of partially-full, yet totally-abandoned shopping carts jamming the aisles. You could barely make it through the door and into the produce section through a mess like that. This chaotic reality is exactly what ecommerce marketers have to muck through daily as just a smidgen under 70 percent of online shopping carts get abandoned, on average.

But there are ways of getting those shoppers back to claim and finally complete their purchases. It basically boils down to creating a sense of urgency that prevents people from just walking away from a full shopping cart. You could compare the following two psychologically compelling techniques to a carrot and a stick. The carrot—price anchoring—makes a price look so good compared to other options that the customer is driven to purchase because they think it’s a deal they can’t pass up. The stick—loss aversion—taps into the customer’s overwhelming fear of losing something valuable.

Let’s break down how each of these techniques works and how you can apply them to boost your conversion rate while conversely lowering your cart abandonment rate.

You might call price anchoring a mental bias towards the lasting first impression. In other words, a higher price displayed next to a lower price provides an anchor that makes the lower price (even if that price is also somewhat elevated) stick in the buyer’s brain, making them think the lower price is an excellent deal they simply must take advantage of. It’s completely irrational, but to the buyer it seems rational and logical at the time. They feel that they’re making a smart purchase.

Let’s say you want to buy a subscription to an interesting magazine and you have the following options:

See what happened there? If you’re like 84 percent of the people who responded to this offer, you chose the online + print version because it seemed like a way better deal than the print only option and quite reasonable compared to the online only option (which was chosen by only 16 percent of the respondents).

In fact, many people wondered why the magazine even offered the print only option in the first place. But further tests showed the method behind their apparent madness. When that ridiculous print-only option was removed, this is what customers decided to purchase:

The print only option seemed useless to the customer, but to the online marketer, it translated in a much higher income. This is because the customer relied on the first bits of information given and based their decisions on that “anchor” impression.

What this means for you as an online marketer: Experiment with placing premium products next to standard ones, regardless of what product or service you’re selling. But instead of just going with two price options, consider placing a somewhat irrationally-priced third option into that mix to make the premium option seem like a better deal than the standard option; hint that it won’t last long.

Speaking of not lasting for long, on to loss aversion…

2. Loss Aversion Makes it Scary Not to Buy

Back in 1979, psychologists Daniel Kahneman and Amos Tversky put forward the idea that losing $10.00 was far more painful (and motivating) to human beings than the prospect of finding $10.00. You can see why this concept, originally called “prospect theory” became “loss aversion.” In fact, their studies showed that the pain of losing was twice as powerful as the joy of getting a pleasant surprise.

Science Magazine discussed another experiment illustrating how we humans find avoiding loss more urgent than winning something new. Study participants were handed $50 at the beginning and then given two options to choose from: 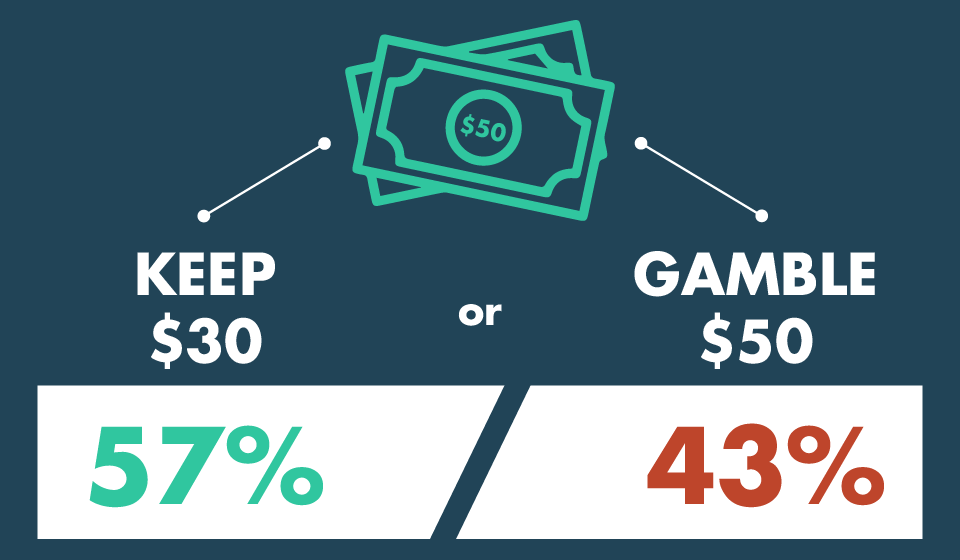 57 percent of the participants decided to keep the $30 and forgo gambling. But it gets more interesting with the next group of participants: 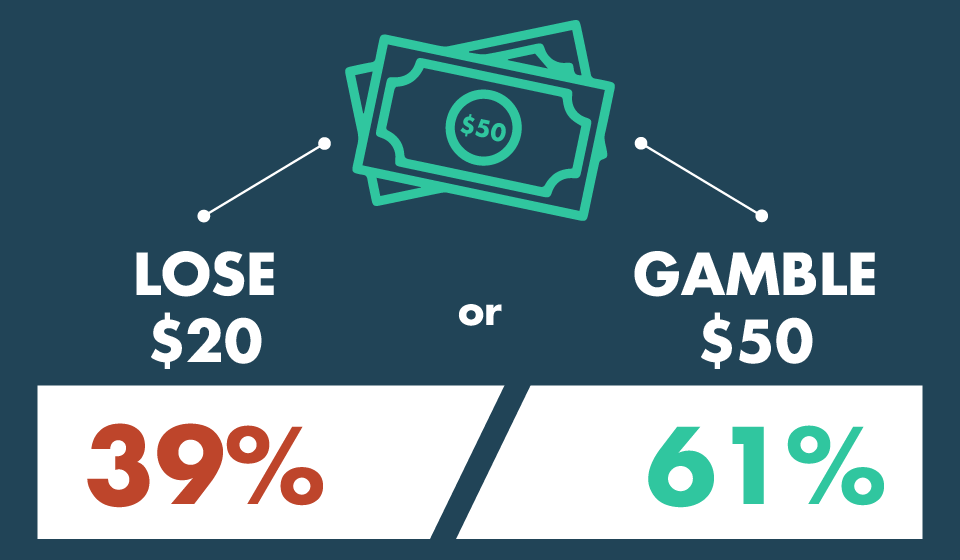 In this study, only 39 percent chose to lose the $20 because the researchers put the game into a “loss” frame, even though the game itself really hadn’t changed at all. The very concept of losing that $20 was more painful than keeping the $30—or even gambling, which 61 percent of the participants chose to do, simply by changing one word—lose.

To use loss aversion as an ecommerce marketing technique, you can test offers that frame not buying something as a painful loss. For example:

You have to imply to the customer that they already have something (their money), but that by not buying your product or service, they’re actually losing their money to a choice that has less value. It’s not about saving them money, it’s about preventing them from losing their money.

Another way of using loss aversion is by offering customers a chance to use your product or service for free for a limited time. If they really like and get used to using the product, they won’t want to give it up at the end of the trial period, because that would be a loss. They’re far more likely to pay or subscribe, particularly if you point out clearly what they’ll be losing if they don’t pony up.

By the way, there’s another trick to the “free trial” period and loss aversion that you should know about. Many online marketers worry over the question of whether or not they should ask for credit card information before starting the free trial (“don’t worry, we won’t charge it until you cancel your free trial…”), or after the free trial period is over. Lucky for you, there is some good data to back up your decision here too. The Kissmetrics Blog pointed out that conversion rates as much as doubled for those marketers who did not require a credit card number up front.

That’s double the conversion rate for marketers who simply relied on the “loss aversion” concept!

Helpful hint: Conversion rates increased further for the companies who stayed in touch with their prospective customers via “welcome” emails, emails with tips on how to use the product, and emails reminding them that their free trial period was close to ending.

For more actionable ecommerce marketing tips and other tricks for getting those online shopping carts through the checkout line download our new ecommerce business guide – 70 Ways to Market Your Ecommerce Website.